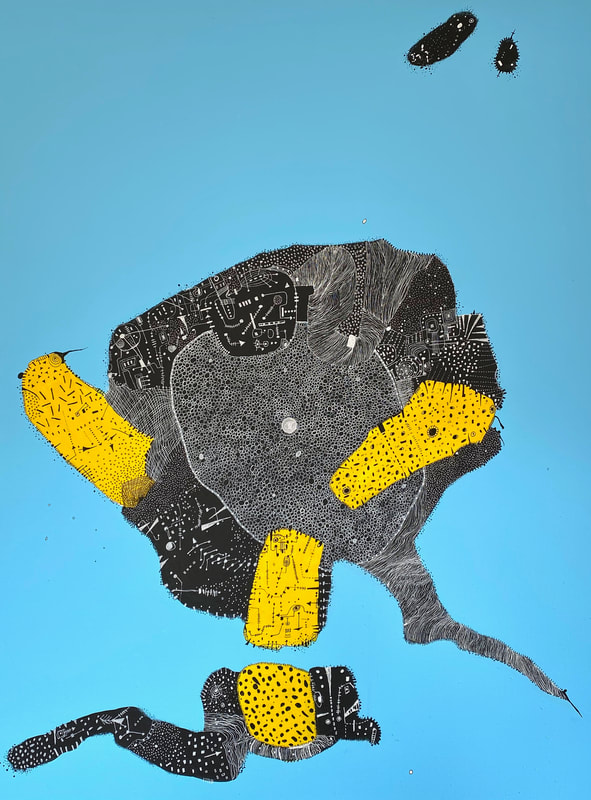 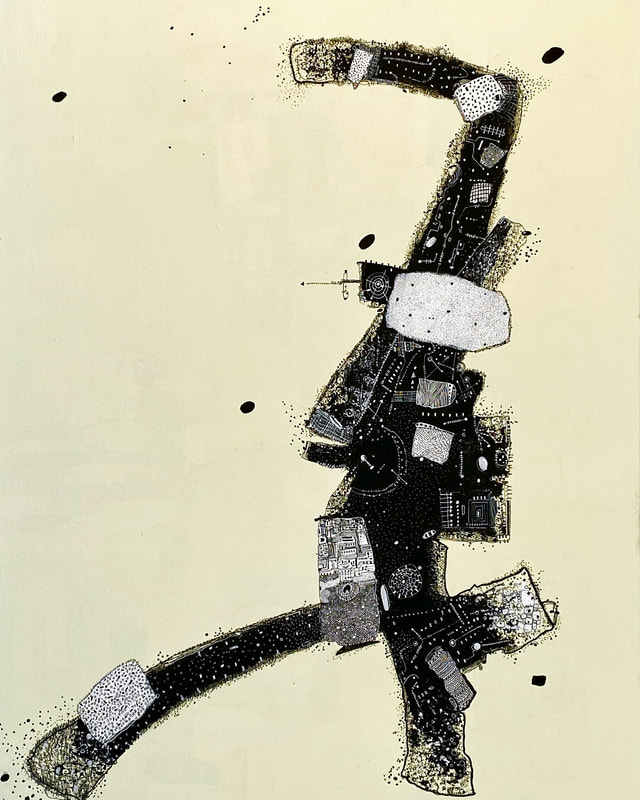 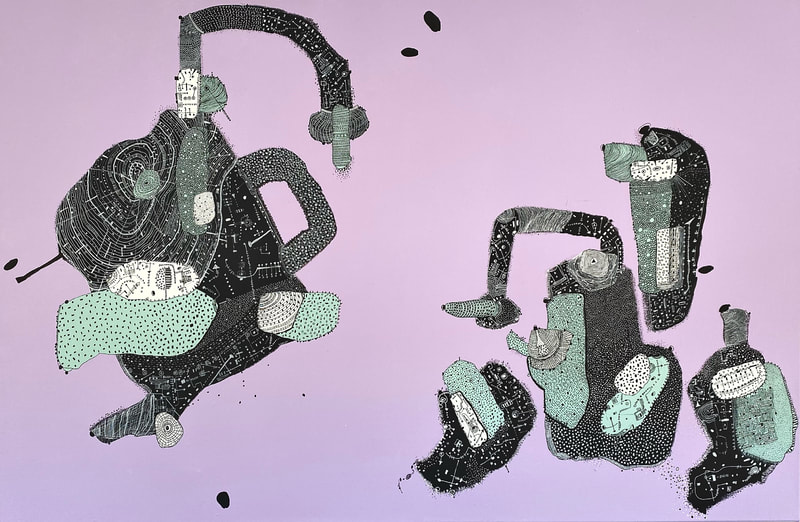 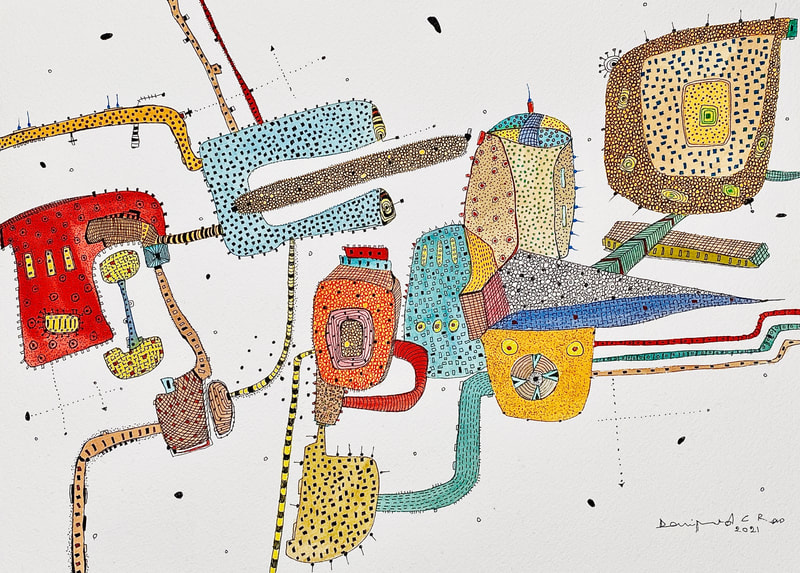 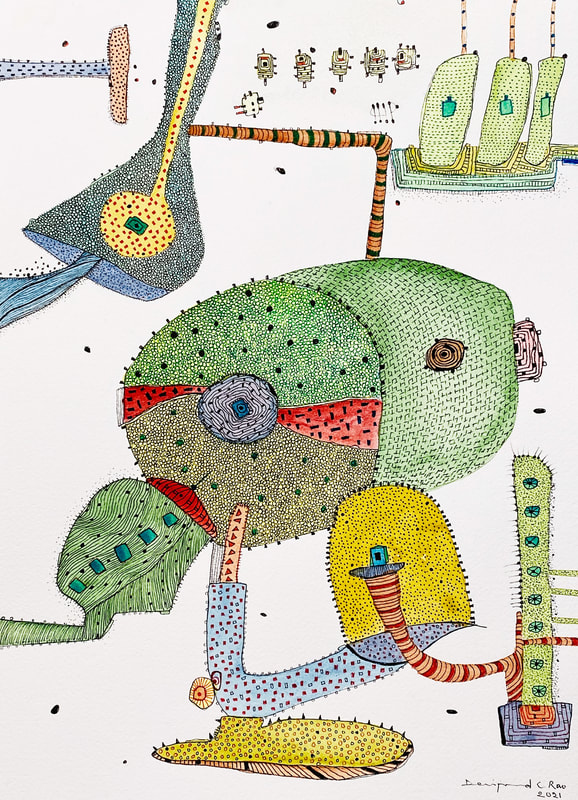 An entirely self-taught artist, Deviprasad C Rao (fondly known as Devi) quit his job in PR & Marketing 20 years ago to embark on an artistic adventure. He escaped into a world of his own, a world where picture-making is paramount.

Rebelling against conformist ideas of composition and structure, Devi created a language of his own to articulate his world the way he sees it. Through constant doodling, drawing and sketching, he evolved his artistic idiom of form. Lines, dots, squiggles, amorphous shapes – Devi's creative vocabulary is filled with its syntax and grammar of forms. He communicates his language on paper, canvas, wire sculpture and even his own body. Devi draws outlines, pulling them across here, finishing them abruptly there, layering them with blotches and flecks. His canvases are sprayed and strewn with dots and daubs of paint. These forms are his characters, script and symbols. These are his alphabet.

Devi is interested in introspection and meditation coupled with his curiosity of Buddhism, which led to his "Buddha" series, currently named "Emptiness and Forms". This series is based on the message from the Heart Sutra where Buddha says, "Form is part of emptiness and emptiness is part of forms". Taking that clue, Devi creates little ambiguous forms floating or dancing in emptiness, yet with innumerable details and density within. He explores himself as a seeker of truth, awareness, and faith. His spiritual quest is mirrored in these abstract works where forms and emptiness form as one union. The inner world takes centre-stage that intuitively expresses tiny dense details all over the forms while he, himself, experiences the state of formless awareness.

Since his college days, the world of factories and machinery has become Devi's source of inspiration. The series "Industrial Fragments" is inspired by factories, machinery and industrial parks that he witnessed in various countries he visited. Devi was deeply impressed, especially by his visit to the industrial park called "Landschaftspark Nord" in Duisburg, Germany. Devi turns this moulding mount of machine parts into his own visual and colour world. A multi-layered structure filled with abstract filigree forms and minute structures.

Devi's art has taken many forms through the years and has found multiple modes of expression. As a live installation artist, Devi has delved deep into the self to explore or discover his true identity. There have been phases in which he focuses more on action painting and Pollock-like artistry but then returns to his meditative musings. There is no crazed distortion of form but a very controlled deliberate delineation even during his action painting. Devi rebels against convention and the banality of tradition, yes. But, he does fall back on fine detail, crosshatched strokes and a wealth of spare lines to render his potent eloquent works of art. Authenticity is key. Explore your intuition, find your spontaneity, live your art is the credo he lives by. Indeed, Devi's art is him, and he is – his art.​

The above statement is partially based on the text written by "Samira Seth" - Curator and Art Journalist, India.